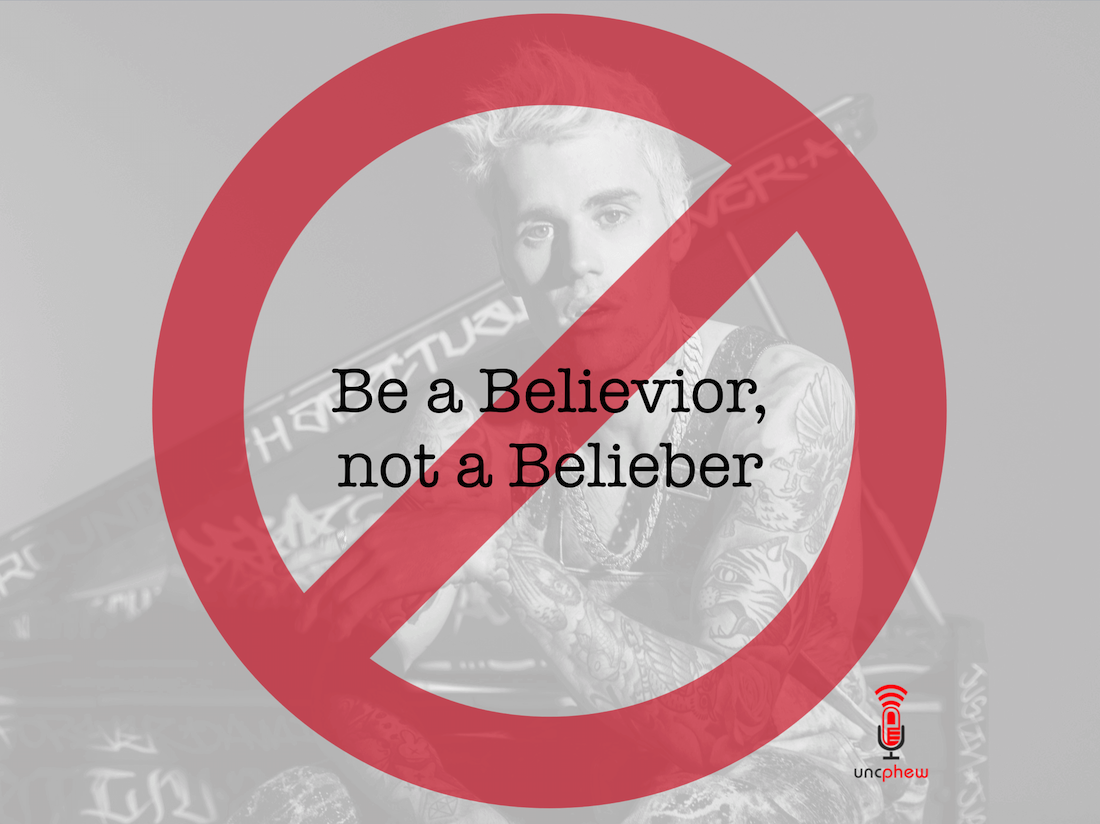 EP24: Be a Believior, Not a Belieber

I have nothing against Justin Bieber. But it’s far more important to be a Believior than it is to be a Belieber (sorry, Biebs!).

Not about the Biebs

It’s a post about a long and arduous journey from a place of anxiety, conflict and strife…

…to a better place.

A place of peace (or at least the beginnings of peace), and a much healthier and calmer state of mind.

WHAT did you say?

Let’s start with a recent event that brought all of this into focus for me.

About a year ago, as my stepfather’s health moved into serious decline, my mother moved in with me.

In November of 2019, I wrote this blog post about my relationship with her, and how it has evolved – and radically improved – over the course of that experience.

Fast forward nearly five more months, and we continue to get to know each other a little bit better every day.

We’ve settled into a routine, which, in the evenings, consists of dinner, and then an insanely competitive game of Scrabble.

Last night, I made us an amazing meal (disgustingly massive BLTs, with hand-cut baked French fries), and we had a tense, spirited game of Scrabble.

It was wild, and I won on the literal last play of the game, coming from behind in miraculous fashion to do so.

As we sat back and decompressed from playing (I know, that sounds weird, but we are both THAT competitive), my mother said something she has never said to me before, ever:

The LAST PERSON who would likely say that

You have to understand, that’s something no one ever says to me.

Further, my mother is the last person I would expect to say those words to me.

I’m high strung, and a classic “Type A” (or Type A+) personality.

I’m basically always “on,” all the time, and have been since birth.

I seemingly have no need for R&R.

The last time I attempted to take a vacation, which was about three years ago, I drove from my home in Plymouth, Michigan all the way to Traverse City in the northern lower peninsula, where I had planned a two-week bicycle tour of northern Michigan at the end of what had been a spectacular summer.

I arrived in Traverse City and found a bar, where I had a burger and a beer.

I walked around Traverse City for a little while – it’s a gorgeous town on Grand Traverse Bay on spectacular Lake Michigan – and all I could think about was, “What am I doing? I have no interest in this, now that I am here. Honestly, I’d rather be back home. I have so much work I’d like to get done.”

I then got back in my car, and made the drive back home in a shade under three hours (do the math on that; it’s terrifying).

So, yeah, in the end, my last “vacation” was driving to Traverse City and back in the same day.

As you can imagine, given my personality traits, “peaceful” does not rank at the top of the list of the adjectives most people would use to describe me.

Further, over the course of my life, the person around whom I have been least at peace is my mom (she has a very similar personality, so you get the gist).

Unforgettable words from 15+ years prior

Back on point, last night, when my mother said I seemed to be at peace, I harkened back to something that happened at least 15 years ago.

There was a receptionist who worked in my real estate company named Marcia Tong.

At one time, I had three members of her family on my payroll: her daughter Emily, her son Nathan, and Marcia herself.

The Tongs were good, honest, God-fearing people. I believe Emily was the valedictorian of her high school class, and I think Nathan was close to that in his class.

I mention those things because everything Marcia said and did was clearly being said and done with a keen awareness of and respect for God.

Her children were smart, and they were serious students. Marcia was raising them right. That was obvious.

She was the epitome of what I think of when I hear the expression, “Godly woman.”

One day, as I typically did at least once every day that she was working, I was talking with Marcia. I have no recollection of what we were talking about. All I remember was her saying this: “This place has such a spirit of strife.”

She was referring to the office environment in which we worked.

She was referring to the culture of the company that I created.

And she was referring primarily to the tension that existed between me and my mom (my mother works at the real estate company I own).

That Marcia said what she said in such a normal, matter-of-fact manner made it worse.

It was as if she punched me in the stomach, not just because of the obvious significance of her words, but also because it was her saying them.

I respected her tremendously, and I knew that she wouldn’t say such a thing lightly.   Ergo, I took her words at face value. I believed that she was very likely correct.

I remember taking the short walk from the reception desk into my office just around the corner, entering my office, closing the door behind me, and sitting at my desk in semi-stunned silence.

I couldn’t stop thinking about what she had said.

Introspection and recognition of progress

I take great pride in being introspective. I spend a lot of time in self-analysis. I don’t know why I do this, but it’s something I’ve done for a very long time.

I know I’m not very objective, because, the truth is, it’s almost impossible to be totally objective about one’s self.

But I remember that day as a day when my level of introspection took another big step forward.

It made me realize that my personality inherently creates tension in other people.

Not in all other people, mind you (at least I hope not!).

But in many other people.

Since that time, with varying degrees of attention and intensity, I have been working on dialing back my personality.

And not having to comment on everything I see.

And not sharing my opinion when it isn’t specifically requested.

And learning to go with the flow and roll with the punches.

And learning to RELAX.

Getting back to last night, and what my mother said to me, that felt like a pretty big deal to me.

Here I was, sitting with the person with whom I have been LEAST at peace with for basically my entire life…

…and she was telling me how at peace I seemed to be.

That was direct, tangible confirmation of the progress I’ve made in the last 15 or so years.

And that then opened the door to yet another level of introspection, which was this: finally, finally, FINALLY, maybe, just maybe, I was starting to evidence what the Bible refers to as the “The fruit of the Spirit.” The scripture that talks about this is Galatians 5:22-23:

But the fruit of the Spirit is love, joy, peace, forbearance, kindness, goodness, faithfulness, gentleness and self-control.

The truth is, I have struggled with this issue my entire life.

Being candid, the people who know me best would not describe me as loving, peaceful, gentle or having an abundance of self-control.

At least not consistently.

My theory on how I have finally started developing some level of true inner peace, and to finally evidence at least a little bit of the fruit of the Spirit: I have begun to behave in a manner consistent with my beliefs.

For the longest time, I have believed in the God of the Christian Bible.

And, if that is the case, and if I truly believe in God, then I know…

…No weapon formed against me will prosper (Isaiah 54:17)

…He determines every outcome (Proverbs 16:33)

…He provides me a peace I cannot create on my own (Philippians 4:6-7)

So, if I claim to believe in God – and, make no mistake, I absolutely do – and if believing in God means all the things I just listed, and a lot more – and that is exactly what that means – then I need to learn to act like I believe in God.

Let what I BELIEVE manifest in how I BEHAVE.

I’d be the first to admit it’s taken me a long time to get to this point.

But that is the essence of the Christian experience, at least for me.

And then one step forward, and two steps back.

But, over the long haul, the steps forward outnumber the steps back.

Becoming a Christian doesn’t suddenly make you a better person.

Or even a different person.

Being a Christian simply allows you to have a relationship with God, to have your sins forgiven and to receive eternal salvation.

And – make no mistake – those things are massive.

They are the most important things possible in this life.

But just because those things are true – and they are – doesn’t mean you become perfect upon becoming a Christian.

Perfection is not possible; but BETTER is

Perfection simply isn’t possible for us.

But we can get better.

And that is what this post is about: getting better.

I wrote this post to share one aspect of me “getting better” over the course of my Christian journey.

There are many other aspects of my life that still need work.

Many of them need LOTS of work.

But I can tell you that, just in this one area of my life, the struggle has been worth the result.

I hope this encourages you to keep struggling to try to get better in life.

To make what your behavior line up with your beliefs.

To become a true Believior…

PS – Irony: Beiber IS a believior

As you may or may not be aware, Justin Bieber became a Christian in 2014.

Like so many, he had to overcome the bad examples he saw in many Christians before getting to the point where he could make that decision.

Here’s an interesting article on why so many people seem to care about Bieber’s spirituality.

I mention these things, in addition to sharing the two videos below, simply because I wanted to acknowledge Bieber as a Christian. I think he’s undoubtedly caused many people of his generation to view Christianity through a different lense, which is cool.

Loosely related, you may find this interesting. And if you enjoyed that, check out Mouthy Buddha’s YouTube channel. He has a number of outstanding, provocative videos covering a wide range of subjects…

Ya Gotta Have Faith <— Prior