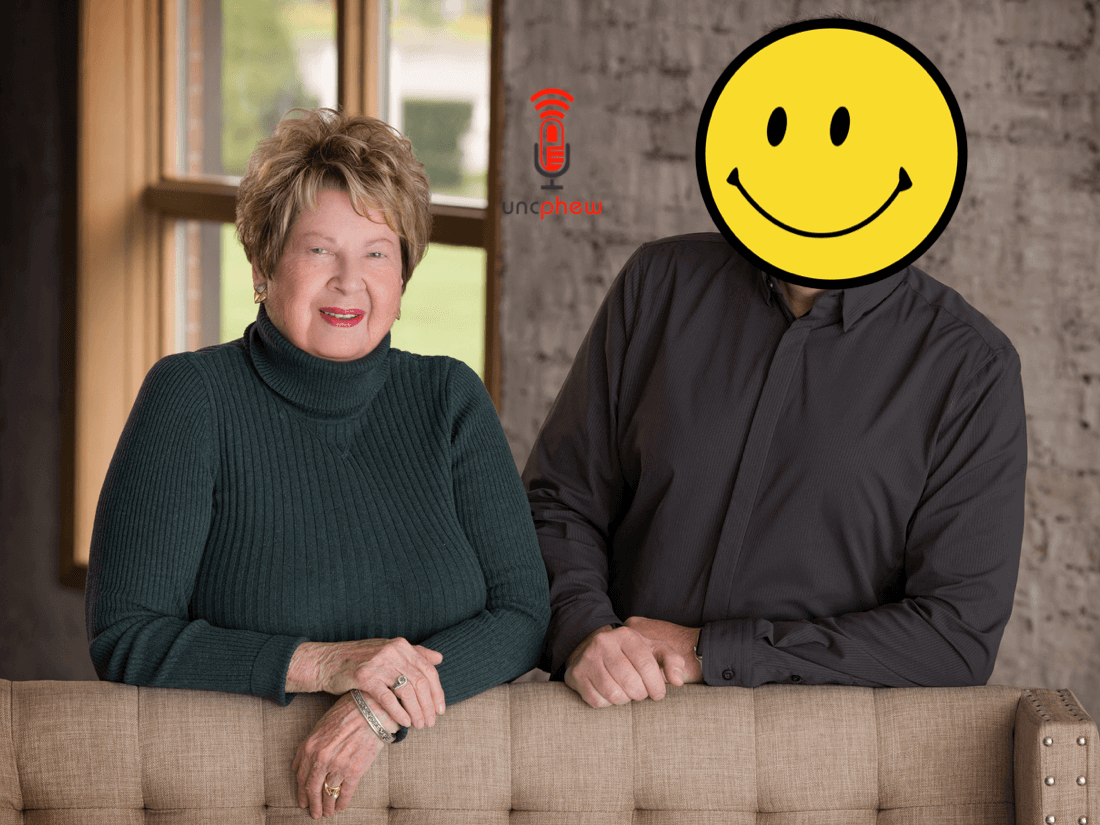 November 4, 2019 In Personal By Michael McClure

EP22: An Open Letter to My Mom

This may be the most intimate, personal thing I’ve ever shared publicly. I hope it resonates with you on some level…

Of the various themes/trends/truths that have dominated my life as long as I can remember, at or near the top of that short list – very sadly, I will be the first to admit – is “ongoing, consistent conflict with you,” mom.

Making that admission worse – and all the more painful to experience –is that I am your only child. Given that my father passed away in 2006, you have been my only immediate family for the past 13 years.

The conflict between us has been a constant, and that’s been true my entire life, dating back to my earliest memory, and even before that.

According to you, mom, the very first words I ever spoke – which I apparently uttered while watching you attempt to return a vacuum cleaner to what I thought was an incorrect storage location – were, “What are you doing? That does NOT go there!”

So, our first exchange was contentious, and that set the tone for our relationship for the vast majority of the years that have followed.

And, as you are well aware, that is a LOT of years.

At our worst – when my former career as a CPA took me to a different state, where I lived for five years – we went long stretches without speaking. I was young, lacking life experience and wisdom, and hyper focused on career, so “family” (which really meant you, mom, because you and my dad had at that time been long divorced, and he lived in a different state) took a back seat.

At one point, I recall we went many months without speaking or communicating at all (this was before email or social media, so it was easier to not communicate back then).

I could write a book on why I think we’ve had such a hard time getting along.

But I don’t really want to delve into those things, lest they detract from the real points I am attempting to make here.

Suffice it to say that, in the final analysis, I am the classic immovable object, and you are the quintessential unstoppable force.

It’s ironic that, when you really dig deep and analyze “us,” probably the easiest way to explain our historically combative relationship is this: we are simply too similar.

We are too much alike.

That said, given our respective ages, and given how long these behavioral patterns of ours have been not just established, but DEEPLY established and entrenched, for many, many years, I’ve often thought, “This is it. This is who we are. This is the level of our dysfunction. This is simply the way it’s always going to be.”

And then life came along and threw us a curveball.

By virtue of these two significant life events, I have come to realize that many (most?) of the judgments I’ve formed and clung to as gospel about you, mom, for all these years have been wrong.

Maybe a better way of saying that would be that I’ve come to realize that there are many things about you that I really didn’t know or fully appreciate, and that – when factoring these new realizations into my overall assessment of you – I now have a totally different macro view of who, exactly, you are.

I know, that must sound crazy.

But I know that it IS possible, because I’ve lived it firsthand.

What I have experienced in the last couple of years or so – which is about how long ago I first started realizing how wrong I’ve been about you all these years – has truly shocked me.

It’s made me realize how incredibly easy it is to form and hang on to very wrong views and opinions of and about people.

So, what, exactly, happened to change my ultimate view of you?

YOU ARE A FIERCE, TENACIOUS ADVOCATE

First, with respect to the issue of Tim’s deteriorating health:

In summary, the support and advocacy you’ve unwaveringly demonstrated for your husband is humbling to behold.

YOUR STAMINA IS NOT OF THIS WORLD

Second, with respect to the sheer amount of time that you have invested in supporting and caring for Tim:

Third, with respect to what it’s been like having you move in with me:

What I’ve mentioned so far are only the new observations and revelations about you that I’ve made and experienced within the last year or so.

In addition to those things, there are all the other things I’ve always known, respected and loved about you, most of which I’ve never fully expressed to you appropriately (or, even if I have, I haven’t done that nearly enough, and or with enough force, conviction and appreciation).

YOUR LOVE OF PEOPLE AND OF LIFE

There is your incredible passion for other people, and your unusual zest and zeal for life itself:

Again, I am humbled by the massive gap between your approach to life and my own.

There is your amazing combination of personal traits and characteristics that are so uniquely you:

That is to say, there is only one you. God broke the mold, for sure.

YOUR LOVE OF GOD

There is your incredible, immovable, unshakable faith in the God of the Christian Bible:

This morning, I have a special request for you: that you would be with my mother, right now. I know that you are with her always. I have observed how you have honored your Word and your promises with her time and time and time again throughout the course of her life.

She is a perfect example of what your Word says at Psalm 1:1-3: “Blessed is the one who does not walk in step with the wicked or stand in the way that sinners take or sit in the company of mockers, but whose delight is in the law of the Lord, and who meditates on his law day and night. That person is like a tree planted by streams of water, which yields its fruit in season and whose leaf does not wither – whatever they do prospers.”

And she is also a perfect example what you promise at Jeremiah 17:7-8: “But blessed is the one who trusts in the Lord, whose confidence is in him. They will be like a tree planted by the water that sends out its roots by the stream. It does not fear when heat comes; its leaves are always green. It has no worries in a year of drought and never fails to bear fruit.”

To bring this point to a conclusion, allow me to say this: When I think of the expression “God-fearing,” I think of you. And we both know I cannot give you any higher compliment than that.

DEAR WORLD, I’D LIKE YOU TO MEET MY MOM

Finally, you may be asking yourself, “Why did you embarrass me by writing this publicly?”

That is a good – and fair – question. I suppose I could have easily just handed you this letter, and let you read it.

However, that just didn’t feel like enough for me.

I sincerely want the world to know who you are, and how amazing and extraordinary you are.

Further, that this is coming from me – the one person who has been, by far, your biggest, loudest and most consistent critic – should make what I have said herein that much more impactful, which is obviously what I’m hoping for.

Finally, I honestly don’t feel as if I wrote a word of this.

As so often happens with me, much of what I express in writing feels as if it’s coming from some other source, rather than from me. I wrote almost all of this in one sitting, when I had absolutely no prior plan to do so. I just felt an overwhelming urge, which I would describe as, “I cannot explain this, but I have to stop what I am doing, and sit down and write “An Open Letter to My Mom.””

And that is exactly what I did.

This letter is what came out of me.

With much love, gratitude, admiration and respect, your son,
Michael

What I wrote above is the actual letter I shared with my mom on November 4, 2019. I wanted to add a few additional comments for anyone else that may read this, to amplify a few things, and also to share some takeaways that occurred to me after the fact.

I’m still trying to wrap my head around that one, as well as the implications of such a massive revelation.

I have to be honest: these are sobering thoughts.

Second, it’s never too late to repair or improve a relationship. My mom and I had lived a relationship that was quite unhealthy for a very, very long time. And it was consistently unhealthy. We were both so stubborn, and so set in our ways, and so quick to escalate pretty much everything, that I had given up hope of ever having a healthy, happy, organically positive relationship with her, ever.

And then, in a matter of just a few months, we’re in an entirely different place, with a radically improved relationship.

Third, I am so thankful for the fact that life circumstances forced me to consider the idea of inviting my mom to move into my home. Long story short, it was the obvious and correct thing for me to do. While part of me honestly wanted it to happen, another part of me was acting out or duty or obligation. That this one decision was the very thing that needed to happen for us to experience the amazing breakthrough that we’ve experienced is awesome.

The point: sometimes, just doing the right thing can set off a chain reaction that leads to something so much bigger and better and different than what we expected. And that is very cool.

Fourth, I now value and treasure every moment I spend with my mom. I know, that probably sounds totally normal and ordinary, but you have to understand that that was not the norm for me up until very recently.

So, for me to be able to actually experience this now, and on a consistent basis – after many decades of not feeling this way very often at all – is nothing short of miraculous.

I’ll end with this: never give up on trying to fix broken relationships.

The Greatest GOAT <— Prior

Next —> Ya Gotta Have Faith