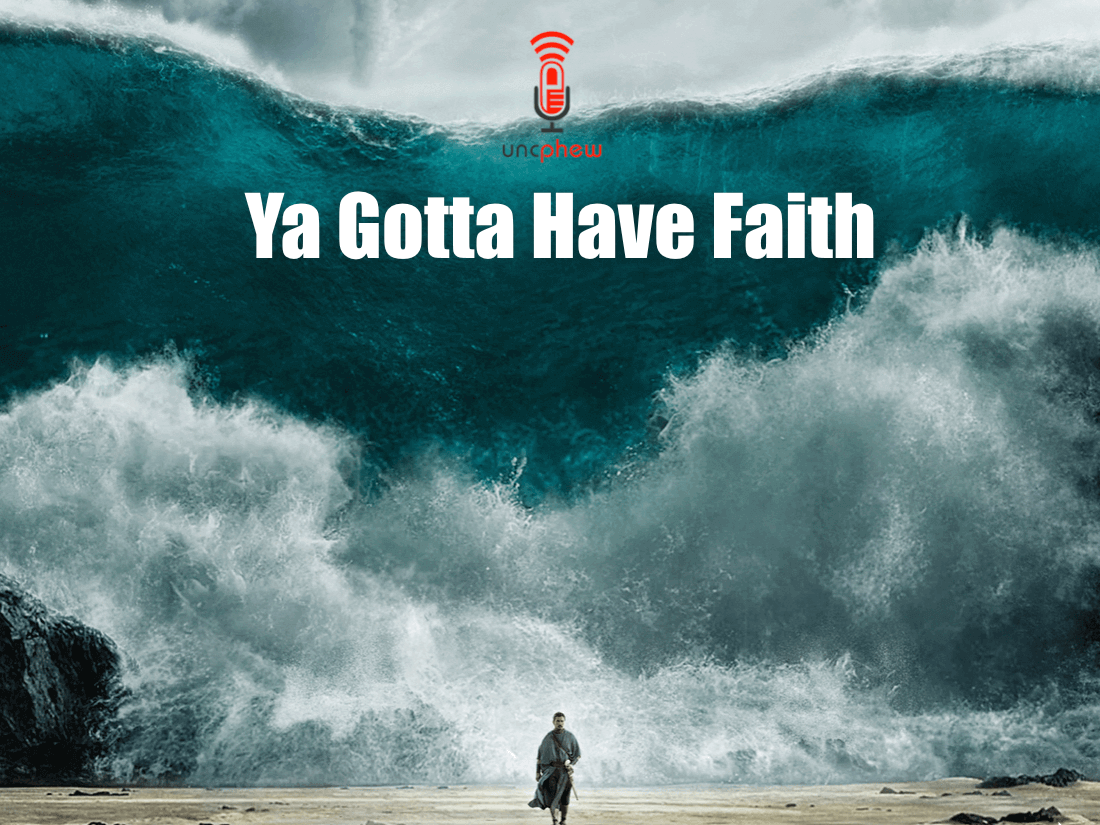 November 16, 2019 In Personal By Michael McClure

EP23: Ya Gotta Have Faith

In order to experience the best in this life, I sincerely believe you must have faith. Ya gotta have faith – you just do.

I HAVE A PROBLEM

Right now, I have a problem.

The kind of problem you lose sleep over.

…for the rest of my life.

BUT I’M NOT WORRIED

The specifics of my problem don’t matter.

They aren’t relevant to the point of this post.

The point of this post is that – no matter what the problem may be, no matter how big or how terrifying it feels, no matter how insurmountable it may appear – I can deal with it.

Why do I feel this way?

To what do I attribute this mentality?

Why do I have such confidence?

Why I am so assured in the face of a situation that could be so devastating?

Why am I not concerned…even though my problem is truly significant?

It’s having a high level of faith seemingly ingrained at birth.

It’s building on that faith, which is the natural result of seeing that faith rewarded time and time again, in a myriad of situations large and small, over the course of a lifetime that has now spanned many decades.

Faith can sustain us in and through the most severe of situations, the darkest of days and the most terrifying of nights.

Faith can overcome literally anything.

Before I continue, I should clarify what I am referring to when I mention “faith,” as that term is used in a whole slew of situations, secular and spiritual alike.

Within that context, “faith” has a fairly narrow definition, and refers to believing in Jesus Christ and the God of the Christian Bible.

What faith is not

To be clear, faith is not a form of delusion.

It’s not some psychological trick we use to deceive ourselves into ignoring reality.

It’s not some emotional slight-of-hand we use to convince ourselves to believe in the fantastic and the unrealistic.

Faith – real faith – is none of those things.

Faith is a tool we can use to actually alter reality.

In fact, according to the Bible, faith can literally move mountains. This is from Matthew 17:20-21:

“Truly I tell you, if you have faith as small as a mustard seed, you can say to this mountain, ‘Move from here to there,’ and it will move. Nothing will be impossible for you.”

While I will mention a little bit more about this later in this post, I simply don’t have the space or the available word count to go into the specifics of all the things I’ve seen and experienced in my life that cause me to have the level of faith that I do. (FWIW, I will be writing separate posts about the more significant of those experiences in the future, so you will be able to judge the validity of those examples yourself, if you are so interested.)

Suffice it to say that, in my opinion, I’ve had a lot of those experiences.

Personally, I am 100% sure that faith works.

I’d bet my life on that.

So, what do we have to do to leverage faith in our lives?

First, we must educate ourselves about faith. And we do that by simply reading the things written about faith in the Bible.

I would implore you do to exactly that. You can click this link and go to a keyword search of the word “faith” every time it’s mentioned in the Bible. Do that to ensure that I’m not misleading you in any way, or spinning or twisting anything for any particular purpose of effect. Or, if you just want a “greatest hits package” of things that happened as a direct result of faith, you can read this one chapter in the Bible.

Second, we need to discern whatever we can from reading those specific scriptures.

Having been a consistent reader of the Bible for many years (I started reading it when I was in my teens, and I have never stopped consuming it consistently), I have read all of those “faith” passages a number of times.

Here are my biggest takeaways, along with the scriptural support for each of those observations:

Takeaway: If you don’t believe, you won’t receive.

If you are a non-believer or a person who lacks faith, the results of your prophecy are self-fulfilling and guaranteed.

If you don’t believe, you will not receive.

You must believe to receive.

So, step one in terms of actually beginning to leverage faith is to open up your heart, your mind, your spirit and your soul to the idea of faith.

To the idea that faith actually matters.

To the idea that faith can actually change the facts and circumstances of your life, and of the lives of the people you love.

Takeaway: We are to rely on faith more than we rely on our natural senses.

In a world that has become increasingly secular over time, this one is really hard for many of us.

The “humanistic/progressive” movement has never been more powerful than it is right now.

Church attendance has been on the decline for decades, and our world is becoming less and less spiritual every day.

Christianity in particular has been under fire for decades, and people have been increasingly hesitant to share their faith publicly.

Not to mention that this idea of relying on faith more than our own senses cuts so powerfully against the grain in terms of our natural, humanistic instincts.

I mean, how on earth can we be expected to believe in what we don’t see more than what we do see?

That doesn’t make any sense…from a human perspective.

But it makes complete sense from a Christian perspective, simply because of all that is documented in the Bible in terms of faith and the incredible results it can produce.

So, how can you begin to move in this direction?

There simply is no substitute for this.

If you want to become an expert in coding, you would absorb all the content you could find about coding. You would go to the source content that would teach you all about coding, and you would consume it.

You would go find the best source information you could find, and you would absorb it.

Faith is no different.

And the Bible is the best and only real source of that information.

Here are a couple of scriptures in support of that idea:

At the most fundamental, bottom-shelf level, you cannot begin to leverage faith without truly understanding what faith is, what it requires, and the results it can produce.

And the Bible is where you learn all those things.

Takeaway: The degree of our faith matters.

Inherent in most of what I’ve written in this blog – and in many of the scripture I have chosen to cite – is the idea that the degree of our faith matters.

And while it is true that having even a small amount of faith can produce amazing results (see Luke 17:6 above), when it comes to faith, more is better. The other three scriptures I cite within this takeaway explicitly support that idea:

So, if the amount of your faith matters, what can we do to develop more faith?

I view building faith exactly like I view building muscle. I’ve spent my entire adult life building both relatively successfully, and the fundamentals are basically the same for each:

But all starts with taking that first step: start to learn about faith.

Takeaway: We can overcome sickness and disease with sufficient faith.

I have nothing to add here except for the fact that I have been healed a number of times in ways that defy any logical, secular, scientific explanation.

I’ve seen many other people have similar experiences.

I’ve even seen my dog healed in a supernatural fashion that was so amazing I broke down and cried on the spot. Long story short (I will tell this story more completely in a future blog post):

I have many other, similar experiences I could share.

And when you live through a number of these instances – in which something you know is supernatural happens right in front of you – it explodes your faith.

Takeaway: We can overcome natural, physical limitations with sufficient faith.

Parting an ocean, collapsing the walls of a castle, becoming the father of many nations when you and your spouse are decades past childbearing age, conquering kingdoms, shutting the mouths of lions, quenching flames, escaping swords, routing armies, and receiving back the dead…that’s quite a list of inexplicable accomplishments, all the direct result of having faith.

Much like my prior story about Manny, I have a number of experiences in which something extraordinary happened that absolutely defied normal, secular explanation. In time, I will write about all of these things in detail:

I have many, many more stories of faith rewarded, which I will share in due time.

When you live through enough of these, your faith grows to the level where it actually becomes somewhat easy to begin to trust your faith more than what you see through your human eyes.

And the Bible confirms that:

The scriptures I cite are explicit in terms of stating that faith can accomplish absolutely anything.

I believe that unequivocally.

I have three concluding thoughts with which I’d like to leave you:

First, please allow me to be clear: God does NOT exist to serve us.

He’s not some cosmic vending machine that exists to dispense whatever we want whenever we want it.

And, very often, God does not give us what we want, for a whole slew of legitimate reasons: to help us grow and mature, to discipline us and teach us lessons, because He has something far better in store for us, because the timing may not be right, etc.

But, to position ourselves to potentially receive what it is we’re hoping for and to maximize our chances for receiving it, it’s crucial to have faith, to understand faith, and to know what the Bible says about faith.

There is much more to the Christian experience, but faith is where it all begins.

Second, if you’re not a believer, then all of this is complete gibberish.

My faith, and the entire idea of faith, must appear laughable to you.

As with just about any and every topic you can think of, the Bible talks about that specifically, in terms of the gap between the secular and the spiritual, and man’s views vs. God’s perspective:

If the Spirit of God is not living in you, then you lack the capacity to perceive any of this.

If your mind and heart are closed, then you won’t be open to much of anything I’ve shared in this post.

I am totally cool with that. I am not trying to win over the unwinnable.

To be clear, that’s not to suggest that I don’t care about people; all I am saying is that God wins over the unwinnable, not me.

I’m simply trying to be obedient to God in terms of sharing my perspective and my experiences, and letting Him handle the rest.

Third and finally, I believe – no, I KNOW – there are countless people out there – maybe even you – who have always intuitively understood many of the things of God.

Primarily, the reality of God.

You’ve seen glimpses of His power.

You’ve just never been properly exposed to the totality of the Christian experience.

You’ve never had the opportunity to learn about such things.

Maybe, just maybe, this will spark something inside you to make a move in that direction.

This is where it all starts: with faith…

An Open Letter to My Mom <— Prior

Next —> Be a Believior, Not a Belieber