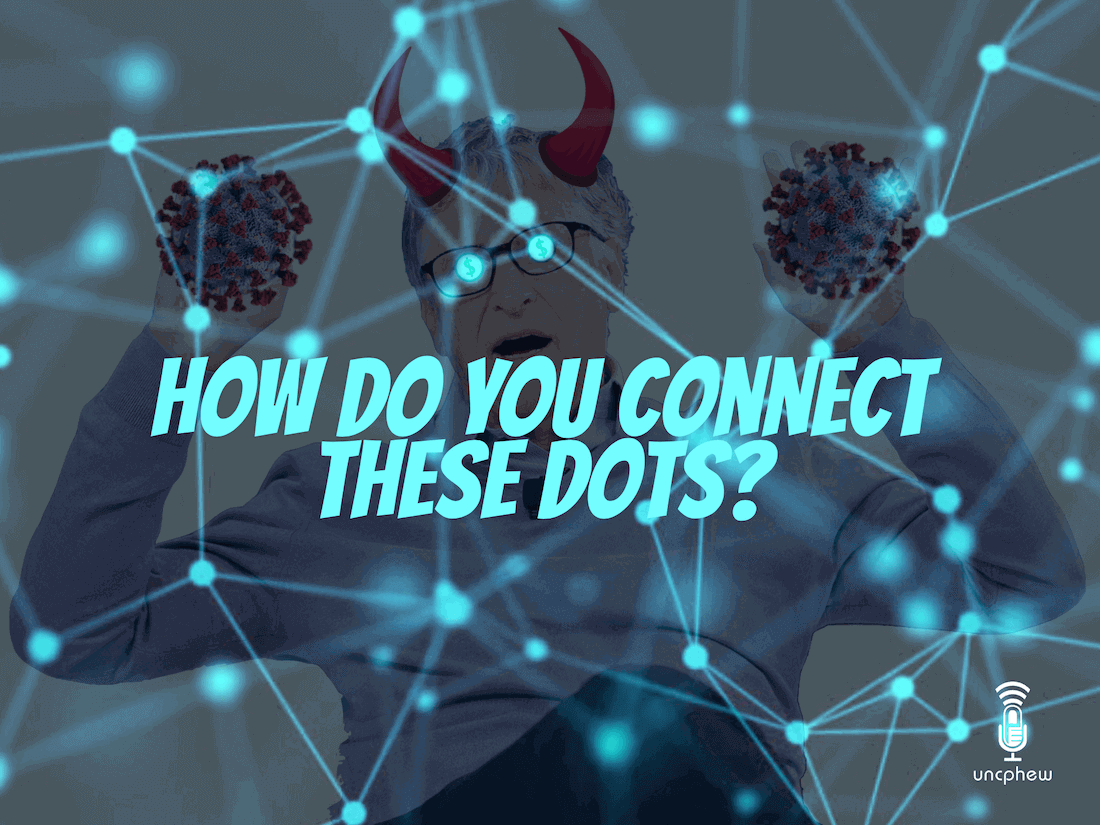 How Do You Connect These Dots?

Some big, potentially important things are happening all around us. I share the facts – not opinions, not speculation, not subjective commentary, but the facts – and I ask you to connect these particular dots however you see fit…

Before I get into this, please allow me to share a couple of prefacing thoughts with you:

– First, I have no intention of telling you what to think or believe as it relates to the things I’m going to share with you in this post.

Do I have an opinions on the things included herein? Of course.

Will you be able to tell what those opinions are? Yes.

That said, I would ask you to make a sincere effort to ignore any bias that may show through, and focus on the facts, the whole facts, and nothing but the facts, as you contemplate what I am about to share with you.

– Second, none of the things I reference in this post are opinions or are subjective in nature.

– Third, what I AM asking you to do is something that I will readily admit has become difficult to do these days: to process information objectively, and to think for yourself.

And, once you’ve done that, I’d also ask you to connect these dots however your thinking, objective mind may connect them.

To repeat, the purpose of this post is NOT to tell you what to think.

◉ Per the New York Times the day I wrote this, “the most powerful private player in global health” is… Bill Gates.

“Mr. Gates had spent billions to help bring vaccines to the developing world, working closely with pharmaceutical executives to transform the market. In doing so, he became the most powerful — and provocative — private player in global health.”

Later in the same article, the following was written:

“As the first vaccine candidates sprint toward regulatory approval, the question of how to immunize much of the world population has taken on added urgency. But nine months in, the success of the vaccine effort, known as Covax, is not at all certain.”

Technology already exists to “store medical information below the skin’s surface” that is “a novel way to record a patient’s vaccination history: storing the data in a pattern of dye, invisible to the naked eye, that is delivered under the skin at the same time as the vaccine.”

Here is the link directly to MIT. EDU, the website of the famed Massachusetts Institute of Technology, about this nascent technology. In the last paragraph of that article on MIT.EDU, note that this “research was funded by the Bill and Melinda Gates Foundation and the Koch Institute Support (core) Grant from the National Cancer Institute.”

To repeat, this is not ME saying this.

It is MIT, one of the most respected institutions of higher learning on earth, particularly with respect to the sciences.

◉ A patent has been filed, the purpose of which is to control a person’s ability to use cryptocurrency based on that person’s behavior. The funding for the supporting research was provided by… Bill Gates.

Here is a link to the patent summary, and this is a direct quote from that summary:

As per the last sentence of that patent summary:

Ergo, if a person’s “bodily activity data” does not “satisfy” whatever conditions may be required for the use of cryptocurrency, whoever is running this system could theoretically deny that person the ability to use said cryptocurrency.

In other words, in a future cashless world, they could stop that person from being able to buy or sell things.

Once more, none of this is subjective (except for the comments I made about how this technology could be used, which is nothing more than logic and common sense; there is simply no purpose for this technology to exist other than to control a person’s ability to use cryptocurrency).

Beyond the link already provided, you can confirm all of this from completely reputable sources that are unimpeachable.

◉  The largest non-state contributor to the World Health Organization is… Bill Gates.

Behind only the US Government itself, the “Bill and Melinda Gates Foundation” is the second largest individual contributor to the World Health Organization (WHO), providing “9.8% of the WHO’s funds.”

You can confirm this via the World Economic Forum.

Here is a link to that information.

◉ It is widely believed that the World Health Organization enabled the spread of COVID-19.

Per Politico.com, the WHO is directly culpable for the degree to which COVID-19 was spread throughout the world. The following was excerpted directly from this link:

“Without China’s deceit and WHO’s solicitude for Beijing, the outbreak might have been more limited, and the world at the very least would have had more time to react to the virus. China committed unforgivable sins of commission, affirmatively lying about the outbreak and punishing doctors and disappearing journalists who told the truth, whereas the WHO committed sins of omission—it lacked independence and courage at a moment of great consequence.

In effect, China and the WHO worked together to expose the rest of the world to the virus, at the same time they downplayed its dangers.”

It’s worth noting that Politico.com is considered to be a left-leaning media outlet, per this source.

In summary, here are the facts – not opinions, not subjective commentary, not an editorial, an op-ed or a hit piece, but hard, cold, anyone-who-wants-to-verify-these-things-can-do-so-quickly-and-easily FACTS – I’ve shared thus far:

✓ Bill Gates is the most powerful individual in the world in terms of “global health,” and is personally helping to fund the development of COVAX, a COVID-19 vaccine.

✓ Technology – funded by Bill Gates – to quickly reveal if a person has, or has not, been vaccinated exists. Today, right now, as you read this.

✓ A patent that appears to serve no logical purpose other than to ultimately control a person’s ability – based on the person’s “bodily activity” – to use cryptocurrency has been filed. This patent was filed by a proxy of Bill Gates.

✓ The second-largest donor, and the largest contributor that is not a country, to the WHO is the Bill and Melinda Gates Foundation.

✓ The WHO’s actions, with respect to their response to the onset of COVID-19, along with their behavior toward China in the aftermath of the outbreak of that pandemic, were, at a minimum, questionable. Even left-leaning media sources have stated publicly that China and the WHO “worked together to expose the rest of the world to the virus, at the same time they downplayed its dangers.”

Based on the facts shared above, and in attempting to figure out if and how to connect the dots I’ve shared, here are the logical questions that come to mind for me:

⁇ How is there not a conflict of interest for a person both [1] serving as the largest individual donor to the WHO, and [2] potentially financially benefiting from the decisions of the WHO?

⁇ What are the practical uses and applications of a technology whose sole purpose seems to be to determine if a person has or has not been vaccinated?

⁇ What motives would the WHO have had for working together with China to “expose the rest of the world to the virus” (COVID-19) and to “downplay its dangers”?

In conclusion and to repeat, do not take my word for any of this…

❖ Do your own research to confirm that what I am sharing with you is, or is not, factual.

❖ If it’s not factual, then you can freely ignore everything I’ve shared with you here.

❖ If it IS factual, then I would ask you to simply use your own mind to do your own thinking.

❖ Come to whatever conclusions your thinking logically leads you.

To repeat, I am NOT trying to tell you WHAT to think.

I am simply asking THAT you think.

PS: More To Consider, If You Are So Inclined

What prompted me to write this post was two things:

First, a similar post from Eric Carvajal, which you can read here.

Thank you, Eric, for doing the vast majority of the heavy lifting with respect to the totality of “this.”

Second, this video featuring Dr. Judy Mikovits, a “controversial virologist” who has been largely vilified by the MSM for her “discredited medical claims.”

While the goal of this post was not to connect the dots for you – but rather to provide you credible information to position YOU to connect whatever dots you deem connectible – Dr. Mikovits provides some additional insights that I think are worthy of your consideration.

With respect to her credibility, if you still believe in the integrity of the vast majority of the mainstream media, you gave up reading this post a long time ago.

My suggestion: just watch the video and let what you learn from it hit you however it hits you.

Beyond that – for those of you are have not categorically rejected the idea that the Bible may indeed be the Word of God – there are striking connections between what I shared above and Biblical prophecy, as follows:

First, note that the patent number for the “Cryptocurrency System Using Body Activity Data” I referenced above ends with “060606.”

One of the most debated and discussed concepts in the Bible is something called the “mark of the beast.”

You’re probably already aware of this, but, just in case, here are the key scriptures – Revelation 13:16-18 – that discuss this idea (emphasis added):

“It also forced all people, great and small, rich and poor, free and slave, to receive a mark on their right hands or on their foreheads, so that they could not buy or sell unless they had the mark, which is the name of the beast or the number of its name. This calls for wisdom. Let the person who has insight calculate the number of the beast, for it is the number of a man. That number is 666.”

Once more, this is not my opinion.

While you may or may not agree with or believe in the Bible, this IS what it says. Here is a link to those verses.

Second, and also Biblically, “Lucifer” – the root of the word “Luciferase” – is another name for Satan.

I mention that because the enzymes necessary to create the luminescence needed for the process described in the “Storing medical information below the skin’s surface” article I referenced above to work are called “Luciferase.”

You can read about that here, or just Google the word “Luciferase” and read what you’ll find quickly and easily.

You can read this in the Bible at Isaiah 14:12. Here is a link that that verse.

Again, draw your own conclusions as to whether these points are, or are not, relevant as you contemplate the larger implication of the facts I’ve shared with you in this post.

Even if you are a non-believer/you place no credence in the Bible or the prophecies included therein, you have to admit these potential connections are a bit unsettling.

For the patent for the technology that, on its face, appears to serve no purpose other than to regulate a person’s ability to use cryptocurrency – that is, to buy and sell in a future cashless society that may be much closer than we realize – to have “060606” as a primary identifier of that technology…

…when the Bible explicitly states that people “could not buy or sell unless they had the mark, which is the name of the beast or the number of its name,” and, “that number is 666″…

…is perhaps the most amazing “coincidence” I’ve ever observed.

If it is indeed a coincidence.

You’ll have to figure that out for yourself…