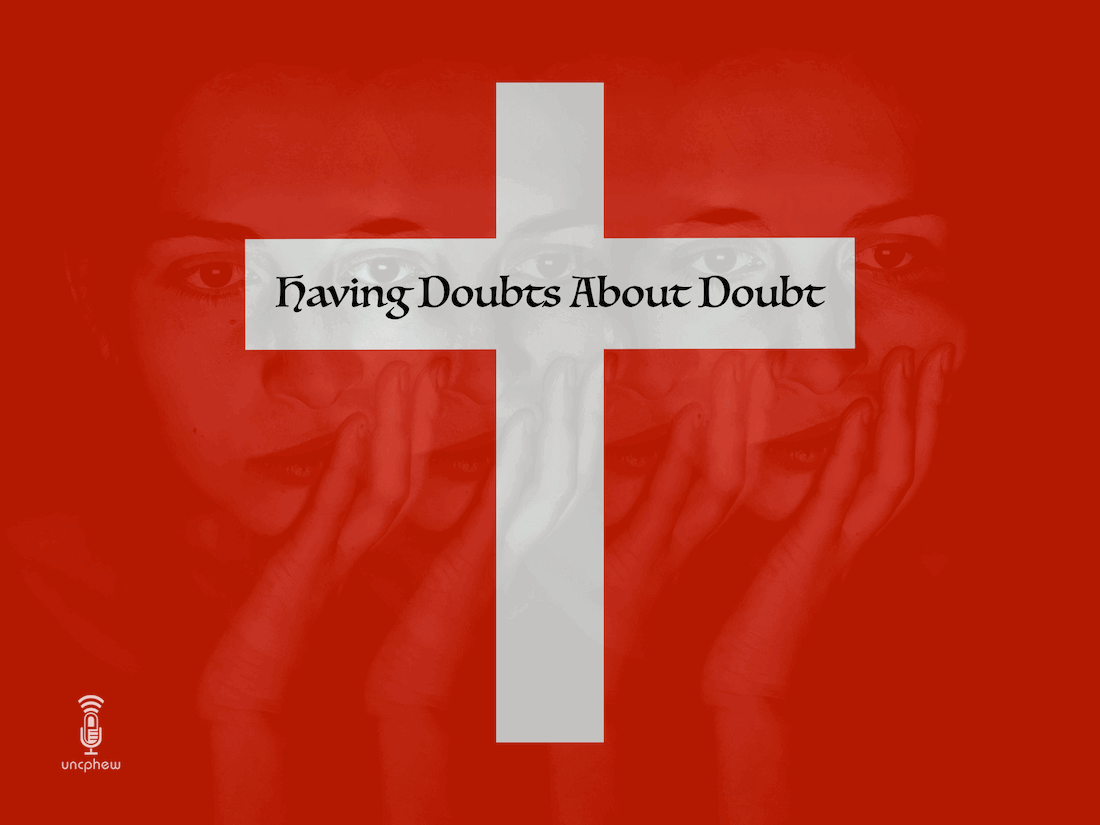 Having Doubts About Doubt

You’re a staunch non-believer. You are confident that there is no God. What happens when you start to have doubts about your doubt about God?

Publicly, you are positive there is no God. You take great pride in self-determination and being the captain of your own ship.

Personally, it’s basically the same. You are quick to share your view that religion is a joke designed to control the masses, and that people who believe in such things simply lack the intelligence to know better, or – perhaps even worse – they need a crutch to get through life because, mentally and emotionally, they’re simply too weak to deal with the realities of reality.

And, for the most part, even when you’re alone and thinking of such things, you’re relatively steadfast in your belief that “God” is something manufactured by man in order to explain all the things that we still haven’t quite figured out yet.

But – every now and then – you have doubts.

More specifically, you have doubts about your doubt about God.

Sometimes, these doubts are a by-product of circumstances…

…when something happens with a degree of precision that feels too statistically improbable to have been random.

…when something happens that makes you realize – in spite of decades of convincing yourself otherwise – that you are not really in control of much of what happens in your life.

…when you narrowly escape tragedy, or even death itself.

Beyond simply dealing with life’s ever-changing array of circumstances, there are other things that sometimes cause you to have doubts about your doubt about God…

When you simply get tired of playing the role of “non-believer.”

It can wear you out, right?

There’s a certain angst that sort of inherently goes with that gig, isn’t there?

A certain militancy, a certain swagger, a certain chip on one’s shoulder.

If you’re really doing the right thing in terms of being a non-believer, should such a stance feel so burdensome?

And yet – sometimes – it does feel burdensome, doesn’t it?

And then there are the battles.

The arguing with complete strangers about how they’re wrong to believe in a higher power.

Sometimes you find yourself thinking, “Why am I doing this? Even if I’m right, how does what any other person believes affect me? So they believe in something that isn’t real. Why is that any concern of mine?”

Sometimes, you feel bad after these exchanges.

Especially when the person you’re attacking keeps their composure, or is actually nice to you, even after you have informed them in no uncertain terms that what they believe is complete BS.

In the heat of the exchange, that actually throws gas on your fire and tends to make you even angrier.

But, when you get away from it and have a chance to cool down, you don’t feel good about the things you said, or the attitude with which you said them…

Not LITERAL voice, of course.

I mean, you’re not CRAZY.

It’s more a feeling that you get from time to time.

Or an urging, or a prompting.

…don’t go down that street.

…give money to this specific homeless person.

…turn down this invitation.

When these things happen, they feel like they are externally sourced.

Sure, you have friends.

You have a small circle of like-minded confidants who, like you, can’t believe people are dumb enough, shallow enough or weak enough to need to believe in some manufactured deity in the sky.

What did Karl Marx say about that? Oh, yeah, he said, “Religion is the opiate of the masses.”

But, if you’re honest with yourself, your friends – while intellectually gifted, and with many other great qualities and attributes – are not the happiest group of people you’ve ever encountered.

Because the truth of the matter is that going out of your way to tell people that what they believe is wrong is not a lot of fun … for anyone involved.

Beyond that, there is little comfort in truly believing there is no higher power to whom you can turn in times of darkness and trouble, and that there is no grand plan or objective to this thing called “life.”

Sometimes, you find yourself wondering, “What is the purpose of life? To be right and to correct all the people who are wrong, or to make the best of everything and to try to simply enjoy my brief time on planet earth, and to help others do the same?”

And then there is the solitude.

The loneliness that you do your best to ignore and to deny.

Sometimes, when you’re with friends or even with a large group of people, you feel alone.

There is a hole in your soul that you can’t seem to fill.

And som, you try to fill that hole, with…

You’ve tried some of those things.

Maybe, you’ve tried all of those things.

And – for a time – some of them actually seemed to work.

But only for a time.

In the immortal words of Mick Jagger, you just can’t get no satisfaction.

That vacancy in your spirit just won’t go away, no matter what you do, and no matter how hard you try.

And you find yourself, once again, feeling very much alone.

Looking for the next thing, the thing you believe will be THE THING that makes all that loneliness go away.

You believe in science.

I mean, what is the credible alternative to science?

There isn’t one, right?

And even though you believe that with every fiber of your being, you still sometimes wonder…

…about how life could have emerged from nothing.

…about how the universe could have been created without a clear source.

(And yes, we have theories on those things, but that’s all they really are: theories.)

…about all the other things we haven’t been able to figure out yet.

Even setting those questions aside, you have this feeling, which you would describe as:

“There has to be more than this. There simply has to be…”

All these things – the stance, the battles, the promptings, the purpose, the solitude and the unanswered questions – add up over time.

They may even cause you to doubt your doubts about God.

Of, more accurately said, I am writing from me.

From my personal experiences.

This is my story, in many respects.

I was raised in the church.

My parents did what they could to raise me with the right principals, morals and values.

But then the world got ahold of me, and began to change me.

Wanting to Fit In

I wanted to be popular.

I wanted to be liked.

I wanted to fit in.

And believing in God – let alone talking about that publicly – was about the uncoolest thing a kid could do.

Remade in the Image of the World

So, I let the world remake me in its image.

I embraced humanism and secularism and all the things the world teaches us.

After living like that for a long time, I ended up a person with many doubts.

At some point – and after seeing God’s Hand at work in my life so many times I could no longer deny it – I realized the foolishness of trying to run from something I knew, deep down, I could never outrun.

So I stopped running from that thing, and – instead – I turned and embraced it.

I stopped doubting my doubt about God.

And that’s when the arc of my life changed.

Dramatically, and for the better.

I’ll stop there and begin to descend from my soapbox.

My story is irrelevant, and so am I.

This post is about you, and your doubts about God.

Maybe you read all this, and you weren’t moved an inch.

You are positive there is no God, and that’s the end of the conversation.

That’s totally cool, and this post clearly was not meant for you.

I’m not judging you, at all, if you disagree with everything I’ve said.

I respect you, and I respect whatever you happen to believe.

I haven’t walked in your shoes. I don’t know your reality.

I appreciate your taking your valuable time to read this far, and I mean that sincerely.

But – maybe – some of the things mentioned in this post do resonate with you.

You do have doubts about your doubt about God.

If that’s you, all I will say is this: follow what’s in your spirit.

Listen to what you feel is being communicated to you – by whatever means you feel that may be happening – and respond accordingly.

Honor those promptings, and just let things happen organically, without forcing anything.

Maybe, what you feel in your spirit will lead to nothing.

In which case you’ll end up exactly where you are now.

No harm, no foul.

On the other hand, maybe what you feel will lead to something…

…something that could reframe your perspective entirely.

None of us – no one, not me, not you, not anyone – can prove or disprove the existence of God.

…If you’re right and believers are wrong, then those people will have believed in vain. They will have deluded themselves in terms of having faith in a higher power that simply did not, and does not, exist. They will have had hope when they should have had none.

…If believers are right and you’re wrong, what then?