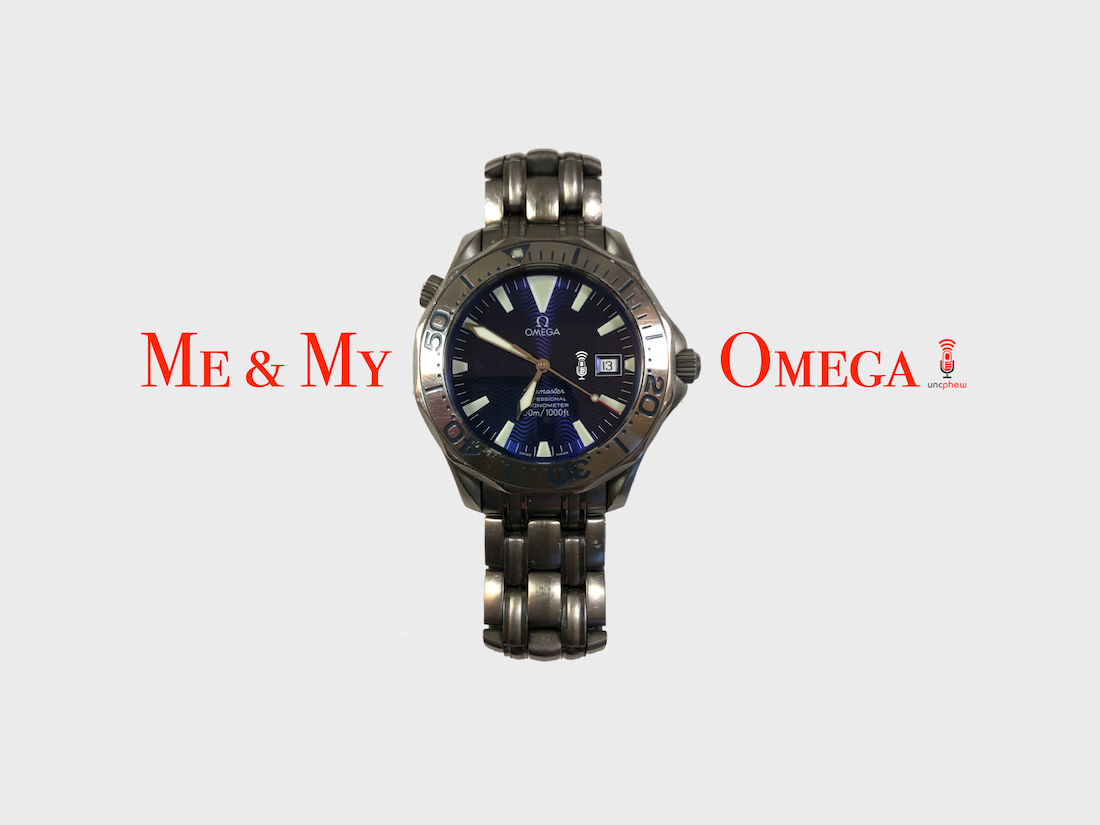 Me and my Omega. It’s amazing how much value we can attach to material possessions that, very often, have absolutely nothing to do with the actual worth of the object itself. This is one such story, and how much value I attach to an Omega Seamaster watch I purchased many, many years ago…

What Would You Save?

If your house was on fire (and assuming there was no one inside that needed to be rescued, of course) and you had an opportunity to run inside and save a single material possession, what would you grab?

I’m guessing the thing you’d save might not be the most valuable.

Or perhaps not even the most useful or pragmatic.

Instead, I think most of us would choose to salvage something based on other intangible factors.

Perhaps the object was a gift from a loved one; it has great sentimental value.

Or it reminds us of something.

Maybe it take us back to a different time in our life, when perhaps things were better.

Or they remind us of some key, transitional time in our life.

When I think of what I’d want to save, the first thing that comes to mind is a watch.

I first learned about Omegas from one of my best childhood friends, Kevin Schugar. Kevin was very intellectual, very bright, very cutting-edge and somebody that I really looked up to. He was a true badass, in the best sense of that word. Kevin was the epitome of cool.

Kevin was one of those rare people who knew about cool stuff before other people did. Back in the day, that was much more impressive than it is today, because we didn’t have the internet, or anything even remotely like the internet, at that time. So, to identify trends, or to lead them, required a higher level of perception and awareness. Kevin had that kind of cultural sensitivity.

One of the first cool things Kevin introduced me to was serious physical fitness. I remember learning about Arnold Schwarzenegger and Franco Columbo and Frank Zane and Sergio Oliva and a bunch of other bodybuilders from Kevin.

As a very thin, not at all muscular high school sophomore, the idea of getting bigger and putting on some muscle was very appealing. And Kevin was the guy who would show me how to do that.

I remember going to my first actual gym – a Nautilus Fitness Center, if you remember those – with Kevin. Following that first “real” workout, I remember not being able to walk or move for the next few days, and absolutely loving the sensation of that muscle soreness.

Within that context, I watched Kevin model incredible consistency and discipline. He was serious about it. He was dedicated. He studied and applied what he learned, and he began to show results.

I was pulled deeper into that process because of Kevin. I developed a discipline around that part of my life. A very real, very hardcore discipline that has only grown over the years.

To this day, I have been going to a gym at least three times a week (and, for my years, a lot more than that), and that all started all the way back with that first Nautilus workout with Kevin many decades ago.

I owe Kevin for introducing me to weightlifting, and for modeling true dedication to that pursuit.

I also owe him for helping me to develop a high level of discipline that then started spilling over into other areas of my life.

That discipline – created and incubated within the narrow context of fitness – has served me well my entire life.

In fact, when I think of the personal characteristics I have that I believe have been most instrumental in helping me to achieve whatever it is that I have achieved in this life, “personal discipline” might be at the top of that list.

At about the same time Kevin turned me on to weightlifting, he also introduced me to another cool thing: luxury watches.

I’d never seen a true quality timepiece up close and personal until Kevin showed me one.

It was an Omega Seamaster.

I don’t recall for certain, but I think it was his dad’s.

He showed me the watch. He held it with great reverence.

He handed it to me.

I remember being surprised at the weight and mass of the watch. It had a presence. It had heft.

Kevin pointed out that the second hand on the watch was moving continuously, as opposed to what second hands do on most watches, which is to move forward one second at a time, stop, and then move forward again.

I recall Kevin explaining to me that that “perpetual, sweeping second hand movement” was the telltale sign of an automatic watch, and that automatic watches (as opposed to battery operated watches) were better and more expensive because they were based on very sophisticated “engines” (based on sophisticated, intricate, tiny internal mechanisms driven by the physical movement of the watch) that allowed the watch to work without a battery.

I don’t know why, but that felt like magic to me. How was that possible? How could a watch function without an external power source (all I had ever known prior to that was watches that ran on battery power)?

I also remember thinking, “Someday, when I’ve made it, I will own one of those.”

Years passed. I graduated from high school, and then went to Michigan State.

I graduated from there and began my career. Things went well, in large part because of the discipline I had developed years earlier.

About five years into that career, I remember setting a very specific goal for myself.

That goal was still a number of years away, and there was no guarantee I’d achieve it, but – for the first time – the Seamaster felt like a real possibility.

Fast forward another five years – now nearly 20 years after I first told myself I’d own one – I achieved that goal, and I had the good fortune to be able to buy my Omega.

It was one of those watershed moments in my life in which I felt like, maybe for just a minute, that I’d made it.

I remember driving home from buying the watch. I kept looking at my wrist, not quite believing I actually finally owned my very own Seamaster.

Over the years, my fascination with luxury watches has grown.

As I had more success, I flirted with the idea of buying another.  There are so many awesome watches out there: Breitling, Rolex, IWC and so many others. I’ve lusted after a number of them over the years, primarily the IWC “Big Pilot” and a number of the military-inspired Breitling models.

Here’s what weird: I had developed such an intense, personal connection my watch, every time I had one of those thoughts, It felt like I was cheating on my Seamaster.

I even had other people say to me, “Really? You’re going to buy another watch? That surprises me, given how much you seem to love the one you have.”

Beyond that, every time I came close to buying a new watch, something strange happened that caused me to change my mind at the very last minute.

On two occasions I can recall, I even had the watches already added into website shopping carts. I was just one click away from owning a rival to my Omega.

But, in both of those instances, something strange happened that caused me to not proceed.

In one case, I had a high-dollar real estate sale go sideways at the last minute, costing me a bunch of money I was going to use to buy the new watch.

In the other, something sort of similar happened.

I remember thinking, “Wow, my Seamaster really doesn’t want me to buy another watch.”

Another thing about automatic watches: they require servicing. That is, you have to send them back to the manufacturer every five to seven years to be tuned up and refurbished in order for them to keep relatively accurate time. And those servicings are not cheap (ballpark cost, today: around $950).

Around 2013 or so, my Seamaster was due for another servicing. The watch was starting to slow down a little bit (that’s when you know it’s time for servicing), and I was having to reset the watch every few weeks to correct the time.

That also happened to be the last time I was seriously thinking about buying another watch. I remember thinking, “I don’t want to spend all that money on servicing my Seamaster if I’ve going to buy a new watch anyway.”

As already noted, I didn’t end up buying another watch. Some more time had passed, and my Seamaster was still doing OK, so I sort of forgot about the servicing.

How Long Can This Thing Run?

Another year passed, and I remember thinking, “I’m way past the service interval, and I really should get my watch serviced, but it doesn’t seem to have slowed any more; just out of curiosity, let’s see how long this thing can run before it basically stops working.”

To my amazement, it’s now 2020, and that watch is still running.

In fact, it doesn’t seem as slow as it once was. I have no idea how that’s possible, because, from a scientific perspective, it’s not possible. The concept of entropy states that things break down over time. They do. I know they do. So I am completely perplexed as to how this watch keeps running as well as it does.

All I know is the damn thing just keeps running.

I’m now at least two full service intervals past when I should have had it refurbished.

It almost feels like my Seamaster has rewarded me for my loyalty to it by not breaking down like it should have. I know, that sounds crazy, but that’s how it really feels to me.

I am completely satisfied with my Omega.

It is built like a tank, and at this point it feels bombproof to me.

I’ll never look at another.

I realize you might have read this to this point and thought, “Wow, this guy is sadly materialistic.”

I apologize if my poor articulation has led you to that conclusion, because that is not my point at all.

– The memories I have of a great friendship with a great dude who introduced me to some really important things: Kevin Schugar.

– The memories I have of a truly wonderful time in my life, when I developed certain qualities that have been incredibly valuable to me throughout the entirety of my life (physical fitness, discipline, work ethic, etc.).

– Maturing enough to be able to focus on, value and appreciate what I have, rather than lusting over that which I don’t.

Those are the reasons I place so much value on my Omega.

Yes, I DO love the watch.

But, every time I look at it, I am reminded of all these other things.

And these other things have much more value to me.

This blog was inspired by an exchange I had with Kevin on Facebook a couple of weeks ago, which you can see below.

Through no intention on either of our parts, we’ve lost touch over the years. Recently, we’ve reconnected via Social Media.

After all this time, and after all these years, it truly warms my heart to see that Kevin is still living with the exact same values, discipline and work ethic he demonstrated so clearly for me all those years ago.

Thank you, good sir, for the significant, positive impact you made at a critical, formative time in my life. I will be forever indebted to you for all the things you’ve done for me…