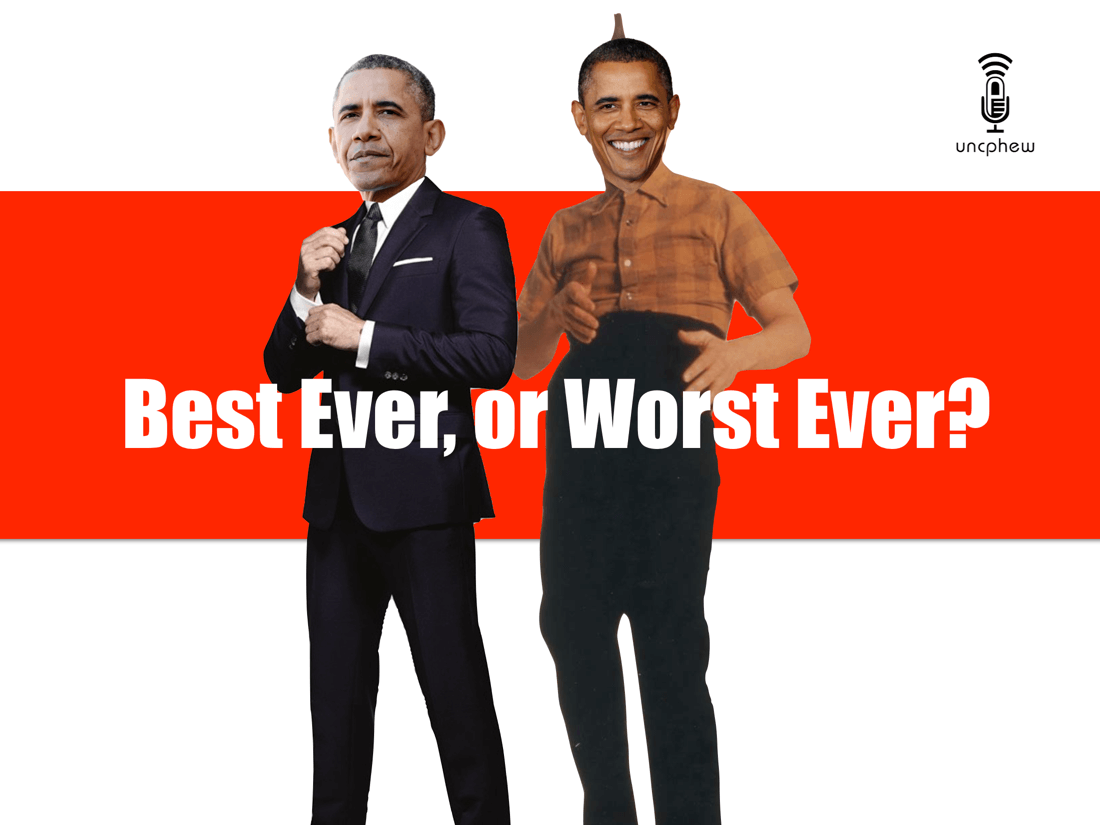 EP18: Obama is the Best/Worst POTUS EVER

Unc and Phew engage in a no-holds-barred, bare-knuckle debate about the best or worst POTUS of all time. It depends on who you agree with…

First of all, let’s establish what a sitting president of the United States is supposed to do. This is from the U.S. Constitution, Article II (emphasis added):

The executive power shall be vested in a President of the United States of America. He shall hold his office during the term of four years, and, together with the Vice President, chosen for the same term, be elected, as follows:

Each state shall appoint, in such manner as the Legislature thereof may direct, a number of electors, equal to the whole number of Senators and Representatives to which the State may be entitled in the Congress: but no Senator or Representative, or person holding an office of trust or profit under the United States, shall be appointed an elector.

The electors shall meet in their respective states, and vote by ballot for two persons, of whom one at least shall not be an inhabitant of the same state with themselves. And they shall make a list of all the persons voted for, and of the number of votes for each; which list they shall sign and certify, and transmit sealed to the seat of the government of the United States, directed to the President of the Senate. The President of the Senate shall, in the presence of the Senate and House of Representatives, open all the certificates, and the votes shall then be counted. The person having the greatest number of votes shall be the President, if such number be a majority of the whole number of electors appointed; and if there be more than one who have such majority, and have an equal number of votes, then the House of Representatives shall immediately choose by ballot one of them for President; and if no person have a majority, then from the five highest on the list the said House shall in like manner choose the President. But in choosing the President, the votes shall be taken by States, the representation from each state having one vote; A quorum for this purpose shall consist of a member or members from two thirds of the states, and a majority of all the states shall be necessary to a choice. In every case, after the choice of the President, the person having the greatest number of votes of the electors shall be the Vice President. But if there should remain two or more who have equal votes, the Senate shall choose from them by ballot the Vice President.

The Congress may determine the time of choosing the electors, and the day on which they shall give their votes; which day shall be the same throughout the United States.

The President shall, at stated times, receive for his services, a compensation, which shall neither be increased nor diminished during the period for which he shall have been elected, and he shall not receive within that period any other emolument from the United States, or any of them.

Before he enter on the execution of his office, he shall take the following oath or affirmation:–“I do solemnly swear (or affirm) that I will faithfully execute the office of President of the United States, and will to the best of my ability, preserve, protect and defend the Constitution of the United States.”

The President shall be commander in chief of the Army and Navy of the United States, and of the militia of the several states, when called into the actual service of the United States; he may require the opinion, in writing, of the principal officer in each of the executive departments, upon any subject relating to the duties of their respective offices, and he shall have power to grant reprieves and pardons for offenses against the United States, except in cases of impeachment.

The President shall have power to fill up all vacancies that may happen during the recess of the Senate, by granting commissions which shall expire at the end of their next session.

He shall from time to time give to the Congress information of the state of the union, and recommend to their consideration such measures as he shall judge necessary and expedient; he may, on extraordinary occasions, convene both Houses, or either of them, and in case of disagreement between them, with respect to the time of adjournment, he may adjourn them to such time as he shall think proper; he shall receive ambassadors and other public ministers; he shall take care that the laws be faithfully executed, and shall commission all the officers of the United States.

The President, Vice President and all civil officers of the United States, shall be removed from office on impeachment for, and conviction of, treason, bribery, or other high crimes and misdemeanors.

I think it’s important that we started this off with that context firmly established.

Obama is the Best POTUS Ever

This will be Obama’s most memorable political play and is inseparable from his presidency. Years from now, Obama’s presidency will be a discussion of The Affordable Care Act and the political tennis match that followed it.

Firstly, it’s working (mostly). It did and does provide health insurance for the first time to millions of Americans who would otherwise be uninsured.

At on point during the recent past, pre-Obama, a war with Iran was known to be imminent. Largely this was due to the fear of them possessing a nuclear weapon.

The deal Barry made with the Iranians prevents any the major path to them acquiring a nuclear weapon. This occurred without firing a shot.

GM paid back the loan, the auto industry was saved.

Don’t take my word for it, see the report that Vice News posted here.

Obama is the Worst POTUS Ever

See here for more information than I’m listing below. That said, here is the key support for my contention that Obama has wreaked havoc on the financial foundation of America…

Reason #2: Obama had the best opportunity in US history to unite us, and all he did was divide us

The specific examples I will cite where he could have united, but he took actions that could only divide, incite and polarize:

Major acts of terror on US soil during Obama’s years

Reason #5: Destroying relations with our primary ally in the Middle East, Israel

Cash for hostages, and also sending them huge money for dubious reasons

The Iran deal itself; shorthand on this:

Reason #7: Not prosecuting Hillary for her email server scandal, etc.

Obama lied about his knowledge of this issue

Reason #8: Russian hacking of the election

We regard the recent unfriendly steps taken by the outgoing US administration as provocative and aimed at further weakening the Russia-US relationship. This runs contrary to the fundamental interests of both the Russian and American people. Considering the global security responsibilities of Russia and the United States, this is also damaging to international relations as a whole.

As it proceeds from international practice, Russia has reasons to respond in kind. Although we have the right to retaliate, we will not resort to irresponsible ‘kitchen’ diplomacy but will plan our further steps to restore Russian-US relations based on the policies of the Trump Administration.

It is regrettable that the Obama Administration is ending its term in this manner. Nevertheless, I offer my New Year greetings to President Obama and his family.

My season’s greetings also to President-elect Donald Trump and the American people.

I wish all of you happiness and prosperity.

Of all the troubling aspects of the Obama presidency, none is more dangerous than the President’s persistent pattern of lawlessness, his willingness to disregard the written law and instead enforce his own policies via executive fiat.

The President’s taste for unilateral action to circumvent Congress should concern every citizen, regardless of party or ideology. The great 18th-century political philosopher Montesquieu observed: “There can be no liberty where the legislative and executive powers are united in the same person, or body of magistrates.” America’s Founding Fathers took this warning to heart, and we should too.

Rule of law doesn’t simply mean that society has laws; dictatorships are often characterized by an abundance of laws. Rather, rule of law means that we are a nation ruled by laws, not men. No one—and especially not the president—is above the law. For that reason, the U.S. Constitution imposes on every president the express duty to “take Care that the Laws be faithfully executed.”

Rather than honor this duty, President Obama has openly defied it by repeatedly suspending, delaying, and waiving portions of the laws that he is charged to enforce. When President Obama disagreed with federal immigration laws, he instructed the Justice Department to cease enforcing the laws. He did the same thing with federal welfare law, drug laws, and the federal Defense of Marriage Act.

In the more than two centuries of our nation’s history, there is simply no precedent for the White House wantonly ignoring federal law and asking others to do the same.

He simply did not do what a President is supposed to do:

Other things I don’t have time to cover: